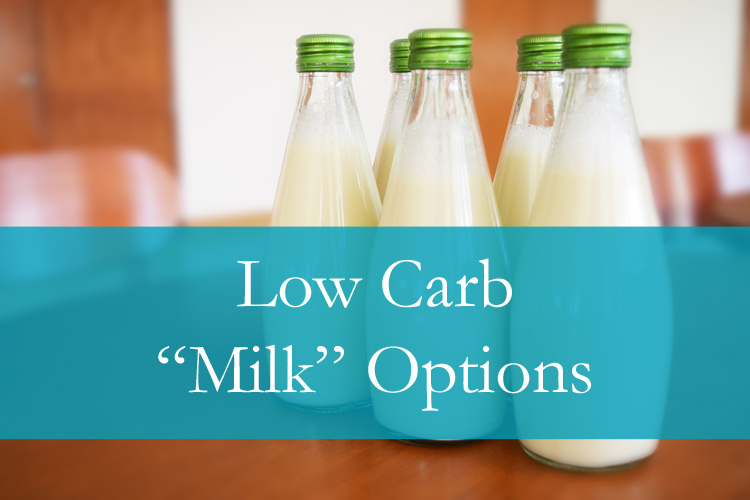 Can you drink milk on a keto diet?

Growing up, we were always told to drink lots of milk to grow big and strong. While milk does have its health benefits (one of the best sources of calcium), it also contains a fair amount of sugar and lactose. An average cup of milk (244 ml) has about 13g of sugar which can be difficult to fit into your carb limit for the day.

If you’re the type of person who loves to chug a glass of milk in the morning, or doesn’t like adding cream to their coffee, there are low carb milk substitutes that you can use in place of regular whole milk!

What are Low Carb Milk Alternatives?

Sounds funny saying it doesn’t it!? They come in a variety of different flavors, but make sure that you’re using the unsweetened versions for a keto diet. There are a few popular types of nut milk that you can find in your local grocery stores including:

You can also make your own easily by soaking your nuts of choice (peanuts, pecans, anything really!) in some water, blending them up and then squeezing it through a nut milk bag.

Probably the most common type of nut milk you can find as it’s readily available in most stores. It does carry a slight almond taste to it, but I find that it’s the closest tasting to the real deal out of the three. Besides, if you’re not a fan of the taste, there are chocolate, vanilla and coconut flavors available!

Almond milk contains a wealth of micro nutrients including calcium, potassium, zinc, vitamin C and vitamin E. It’s also relatively low in calories, as a single serving of a store bought brand tends to be 40 calories per cup and 1-2g of net carbs (depending on the brand).

It’s also incredibly versatile and can be a great way to start your mornings. Whether it’s chugging a glass or even making keto-friendly oatmeal, it’s definitely a staple in my fridge!

I personally find that cashew milk has a stronger nut taste to it compared to my store bought almond milk. However, it tends to have fewer calories as a generic store brand (Silk) contains only 25 calories per cup!

In terms of health benefits, cashew milk contains more vitamin E than almond milk and a single serving provides you with 45% of your daily recommended intake of calcium!

Out of the three common low carb nut milk substitutes, hazelnut milk is harder to find. Hazelnut milk is usually used for creamer products, so it makes the perfect substitute for flavoring your morning coffee!

Since it is a nut milk, it contains similar health benefits as the other two, being rich in vitamin E and being a lower calorie and keto-friendly alternative to traditional whole milk.

Overall, all nut milks have similar health benefits, so it’s really a matter of choosing which one best suits your preferences. I personally enjoy the taste of almond milk, while others prefer the taste and lower calories from cashew milk.

Coconut milk is a more decadent alternative to the other keto-friendly milk options. It is high in fat, calorie dense while being relatively low in carbs. Since it is much richer, you definitely don’t want to be chugging this down like a glass of regular milk!

Coconut milk is made from grating the meat of a mature coconut and does have a hint of coconut taste to it which adds an extra layer of flavor to your dishes. It’s also a great source of manganese, lauric acid and potassium.

It’s used a lot in Asian style cooking and is carried by many Asian supermarkets. Nowadays, I’ve been seeing a lot of traditional grocery stores carry cans of them as well (including Wal-mart!).

If you can’t seem to find them at your local grocery stores, Amazon does carry them as well and will have it delivered straight to you!

If you need some inspiration for cooking with coconut milk, here are some low carb recipes!

While there’s some debate on the health effects of consuming soy, it is still another alternative out on the market. Soy milk can be found in pretty much any Asian supermarket as well, but read the label before purchasing! Many Chinese soy milk drinks (doujiang) tend to have added sugar.

Made from grinding or pureeing soybeans, it has a similar consistency to regular milk. It may be more of an acquired taste as the taste of soy is not as subtle as the taste of the other substitutes.

Soy milk is a great source of protein with a single serving (1 cup) having 7-10 grams of protein while only having 2-4 grams of net carbs.

The last on my list, LC Foods has found a way to strip away the milk sugar and lactose while dehydrating milk into a powdered form. You simply mix water and heavy cream (to help give it a more creamy and authentic milk taste) and voila! Perfect for baking and using in all of your normal milk recipes.

Enhanced with whey protein isolate, this is another great source of protein while on your low carb diet!

Alternatively, you can also always mix another milk substitute with your choice of protein powder for a creamy and flavoured drink! I personally find myself really enjoying Quest’s line of protein powders for taste and consistency.

You can get creative with these powdered mixes and make all sorts of recipes like creamy keto ice cream!

Remember, keto is more of a lifestyle rather than simply a “diet”. It’s difficult to find an exact replacement for some of your favorites, but some substitutions can help curb those cravings and change your eating habits!

Can you drink 1% lowfat milk?

I would recommend avoiding 1% low fat milk when on a keto diet since it tends to contain more sugar. One cup of 1% low fat milk typically has about 12g of carbs which can put you close to the recommended 20g carb limit for your day.

If you can incorporate it in your diet, while still staying in ketosis, then by all means go for it.

I just compared sugar and carbs for our skim and whole milks. Both contain the exact amount of carbs (12 g) per one cup of milk. Sugar amount is also the same with each. Sharing …

What about taking heavy whipping cream and mixing with water to make a milk? What ratio, half and half?

what about raw milk?

Carbmaster milk is cow’s milk that has been put through a filtration process which removes most of the sugar (the carbohydrate in milk is all a form of sugar). It has one quarter the sugar of regular milk (3 g per cup) and is fat free. I prefer some fat content, so I just add a little heavy cream (adds no sugar). With this addition, Carbmaster tastes as good as any regular 2 percent milk I’ve ever had. It is a product of the Kroger company, which sells it in its supermarkets, and also in a regional chain called Harris Teeter, found mainly in the Carolinas. (Kroger stores are found in many states across the country).

Thanks for sharing Allen.

I just recently started this low carb diet but I love milk I found that fairlife is 6carbs a cup why isn’t it considered an alternative?

I was very surprised that unsweetened ALMOND MILk DOES satisfy the need to drink milk. Drink it very COLD. Think of the time you went from fat milk to fat free milk- taste drop is comparable. It helps you to fool your mind with these thoughts!
As a HUGE cow’s milk drinker I encourage you to make the jump!