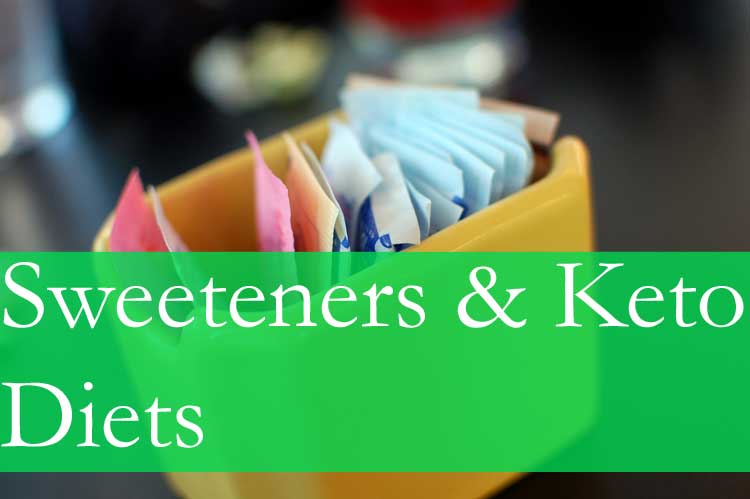 Now that you’re switching to low carb, you’ve probably found yourself with some sweet tooth cravings.

Most fruits and sugary snacks are off limits, but luckily you come across, the much debated about, sweeteners.

You’ve heard so much about how they’re terrible for your health, but many people have conflicting opinions on how they affect ketosis.

Having experimented with all kinds of sweeteners over the last few years, I thought I’d share my personal experience with consuming them. Before I get into it though, I’d advised you consult your doctor or nutritionist before deciding on a sweetener as I am by no means a medical professional!

Are Sweeteners safe for a Keto Diet? 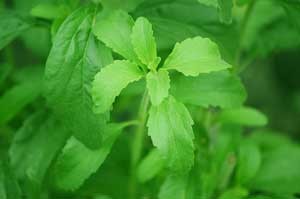 I see a lot of people asking this question. Can I have Sucralose (Splenda)/Stevia/Malitol/Xyltitol/other sweeteners while on a ketogenic diet?

Stevia is an extract from a plant which is approximately 200 to 300 times sweeter than sugar. Stevia has gained popularity in the last few years and is becoming more widely available at local stores across America.

Stevia has a glycemic index of zero, which means it should not affect your blood sugar (insulin) at all. It’s also zero calories and since it’s naturally occurring, it’s been widely adopted by people all over.

One thing to be wary when purchasing stevia is that the product may be mixed with other forms of sweeteners or bulking agents which could have an impact on your blood sugar levels. I’d recommend purchasing Stevia in either it’s powdered form (rather than granular) or as liquid drops to reduce the chances of having it mixed with other ingredients. The only downside, I find with Stevia, is that it tends to carry an after taste (like other sweeteners), but this can be mitigated with the liquid drops.

Monk fruit (also known as Luo Han Guo) is a fruit from Southeast Asia and looks almost like a lime or melon combination. The fruit is usually dried and then used to make medicinal drinks (Liang Cha).

The extract is about 150 to 200 times sweeter than sugar and contains no calories as well. You can purchase the dried fruit at Chinese herbal stores, but if you want to put it in your coffee, you’ll probably want an extract powder or liquid form.

The other two types of sweeteners fall under two major categories, sugar alcohols (extracted from fruits, which the body doesn’t digest), and the artificial sweeteners (aspartame, splenda). Both of these are created in a chemical process, hence them being referred to as artificial.

Here are some of the common types of artificial sweeteners and sugar alcohols you’ll find on the market. 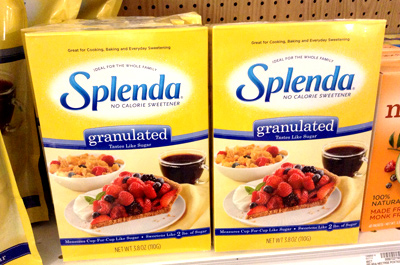 Commonly found on the market as Splenda, sucralose is one of the most commercially available and used sweeteners on the market. It’s created with a chemical process like the rest of the artificial sweeteners.

It’s considered to be about 400-700 times sweeter than sugar and personally I found that it’s one of the best sweeteners to use for baking as it doesn’t carry as much of an after taste as Stevia does. There have been debates on the impact of sucralose and keto diets, or even on health in general. Like with all artificial sweeteners, I’d recommend using it in moderation.

Aspartame is probably the most controversial artificial sweetener on the market. It’s found in plenty of the commonly sold in diet sodas or marketed as NutraSweet and Equal. I won’t dive too much into this but there have been plenty of research papers on the sweetener. Generally, most health professionals recommend avoiding it, but if consumed, try to limit it to small quantities.

Like Stevia, Xylitol is naturally found in many fruits and vegetables that is extracted and becomes a granular substance that can be used as a sweetener. It can also help stabilize insulin levels so it is low in the glycemic index.

Xylitol has about 40 percent fewer calories than sugar. This does mean that Xylitol is not completely calorie free and consumption should be watched.  It is also known to have possible other side effects which I’ll discuss below.

Overall, natural sweeteners would be the best option when it comes to a low carb diet. They’re low in the glycemic index and don’t tend to carry any major negative side effects.

After experimenting with all kinds of sweeteners, I noticed that artificial sweeteners and sugar alcohols always had some sort of side effect on me. While they’re still zero to low calorie, and shouldn’t have a major affect on your weight loss journey, I would still consume them in moderation.Some of the common side effects that I have noticed: 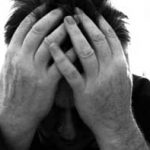 Even if these sweeteners don’t cause your blood sugar levels to spike, they’re still created with a mix of chemicals. I’ve noticed that migraines and headaches are common occurrences after consuming diet sodas (aspartame), or mixing splenda (sucralose) with my coffee. Everybody will react differently to these chemicals, but headaches are a commonly reported side effect of certain sweeteners.

This typically comes after consuming sugar alcohols (commonly found in sugar free candies). Our bodies have a difficult time digesting sugar alcohols, which is why they’re considered safe for low carb dieting. They aren’t completely absorbed by the human body, thus resulting in a smaller insulin spike compared to regular sugars.

Consuming large amounts of sugar alcohols tend to have a laxative effect on many. I know whenever I indulge on a box of sugar free chocolates, I always find myself in the bathroom, telling myself I’ll never eat them again! 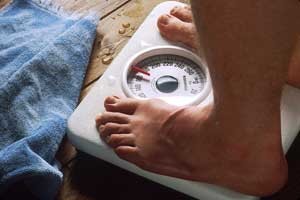 Just because they say zero calories, doesn’t mean you should consume large amounts of sweeteners! Granulated sweeteners tend to contain bulking agents (maltodextrin) which contain small amounts of carbohydrates. While it may not seem like much, you could accidentally be going over your carb limit by satisfying your sweet tooth. To avoid these hidden carbs, powdered or liquid sweetener can be used instead.

Some sweeteners have also been known to cause insulin spikes which will have negative effects on your ketosis. I’m not a super technical person, but if you want more information on this, you can refer to the Keto FAQ on Reddit. 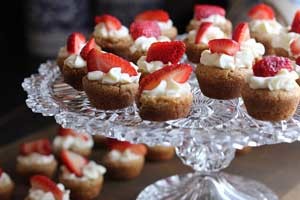 Now this might just be a mental thing, but it’s easy to over consume sweeteners when they’re considered keto friendly. Rather than associating sweets as an occasional treat, it’s easy to over indulge if you’re in the mindset that there are no consequences for consuming them.

This will vary from person to person, but I find that it’s easy to drink a ton of diet soda instead of water since they’re both technically calorie free.

Rather than promote old eating habits, the keto journey is about adopting  better eating habits. Limit treats for special occasions, rather than relying on them as a staple food!

I think it’s all about your mindset. If you’re eating lots of keto sweetened foods every day, there’s a strong possibility that you’re psychologically addicted to these sweet foods and it might be worth cutting them out for a while. And yes, some people do find that even zero carb sweeteners can knock them out of ketosis. Thankfully, I can handle them and I like to make some keto cookies or cake a couple of times a month and it really feels like a lovely treat.

I’ve been using 2 packets of Equal in my coffee ever since kicking pure cane & starting my low carb diet, even picked up some stevia but couldn’t switch from Equal. I’ve lost over 30 lbs and it took about 2-3 months. I recently started to get into Keto and think I have the Keo Flu, I’ve been nauseated the past 4 days. But Equal, Splenda, even natural sweetners (which are overall better than artificial) don’t bump up my carbs drastically enough to ruin my course. Do what you do and if it doesn’t work switch it up.

What a great article, thank you. One thing to consider; eating a large quantity of almost anything can cause your liver to dump and knock out ketosis; I believe Dr. Bernstein calls it, “The Chinese restaurant effect.” It’s really wonderful that you don’t use “scare” tactics. Although, delving into Atkins Endulge Coconut (3 or four of these substitutes for Mounds) set me on the pot, swearing like a binge drinker, “I’ll never eat (drink) again!”. I swear it’s going to put Ex-Lax out of business!

The true test for this type 2 is my BG meter, I don’t spike after diet cokes, and, I don’t get headaches. The only Aspartame I get is with my beloved Diet Cokes as I always use Stevia for sweetening coffee and other things.

Keep up the great writing!